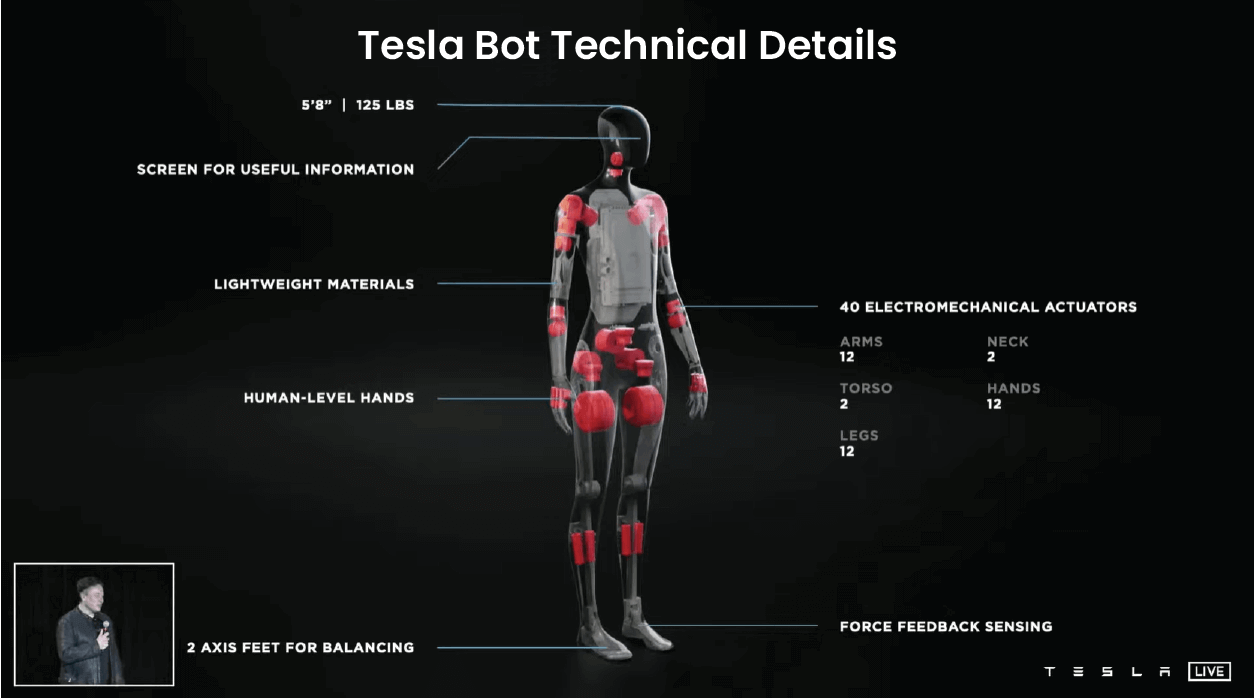 Tesla Bot is the innovation by Elon Musk, CEO of SpaceX, Starlink, Tesla and more. It sounds like Hollywood movies, but human-sized Tesla Robot demonstrated on Tesla AI Day by Mr Musk. According to Elon Musk, Tesla Bot will help a lot to human beings in future. But will it replace humans for jobs in future?

Tesla Bot is a human-size robot designed and developed by Elon Musk. The height of the Tesla Bot is 5.8 feet (or 176.789 Centimeters), and the weight is 56.70 kilograms (or 125 lbs). It has made of lightweight materials to keep it low weight robot to improve the work efficiency. It has 40 electromechanical actuators for various movements of the body.

The Tesla Robot has human-level hands with 12 electric motors and 12 motors for complete arms movements. Also, the legs have 12 motors for movements like going forward, backward, left and right. The exciting feature of the Tesla Bot is the feet mechanism. It has 2-axis feet for balancing and a force feedback sensor which together helps the robot to stand stable on its feet.

Moreover, Elon’s new robot has two motors for the torso and 2 for neck movements. The whole set of 40 electric motors can help Tesla Bot to move somehow like humans. So they can complete the allocated tasks efficiently. But the speed limit of the Tesla Bot kept at 8 kilometres or 5 miles an hour, so the human can easily outrun the modern robot.

Well, there is no particular reason behind the development of the Tesla Bot. But Elon explained some of the benefits of having human-size robots in future.

According to Elon Musk, Tesla Bot can replace humans with dangerous, repetitive and boring tasks. So humans will have the choice to either do physical labour work or get it done by robots!  But we are already using robots (or bots) in our daily lives like robot vacuums, dishwashers, washing machines, and more. Isn’t it doing our job in terms of a machine designed for specific tasks?

Indeed, commercial places using robots (machines) efficiently on a daily basis. Moving the boxes, manufacturing cars and bricklayer machines are all robots working on massive scales. These industrial robots are much needed due to labour shortage and work efficiency. Imagine that if a human has to lay 10,000 bricks a day, would it be possible for one person? But bricklaying robots can make it possible within few hours.

According to Elon Musk, apart from these giant machines, Tesla self-driving car is a robot with tires on it. Other automated bots you might use in your daily routines are your smart tech devices. For example, you asking Google Assistant, Alexa or Siri to do something is a bot task. They are taking your orders and complete them on their level of backend activities.

Why Tesla developing a Humanoid Bot, and will robots replace humans completely?

Elon Musk, the CEO of Tesla and some other companies, have a vision for future human work replacement. Indeed, Tesla has already proven systems like self-driving cars that scanning and detecting surrounded environment for autonomous drive. The accuracy of Tesla self-driving cars are excessively high and serving humans for a while now. So Elon Musk wants to put that all proven system in Tesla Bot now to help humans with other tasks soon.

Elon Musk’s keynotes during Tesla AI Day mentioned that Tesla car sensors and batteries are efficient enough to make something out of it. Tesla Bot is one of them and using a similar computing technology that will behave similarly to humans.

The new Tesla Bot may perform various tasks like take a dog for a walk and buy groceries for you in the future. But Elon’s vision is to give humans a choice if they want to do labour works in future or not. Also, it’s designed to perform dangerous and repetitive tedious tasks that humans might not like to do. So who knows, Tesla Bot might clean the high-rise buildings windows, serve in restaurants and more. But the question is, will it replace the humans from workplaces in future?

Let’s talk practical things! There is no doubt that machines are more efficient and can do much better than humans. But humans are good at many things that can’t be replaced, at least not in the near future. For example, if autonomous car computer or sensors fails due to heat or cold weather, the human brain can control it manually. Similarly, if a self-driving car system gets hacked, a human can disable the autonomous mode and drive it manually.

Somewhat people think about human robots like Hollywood movies that are risks for civilians. Or humans may become robots slaves rather than robots working for humans is a concern for some. But keeping sci-fi movies plot on the side and think differently, what if it can design for a single task like bricklaying?

The power and information supplied via software to robots need to keep minimum to avoid risk from machines. So we can use it efficiently for high-risk jobs like cleaning outside windows at 100 floors building. Or it may help in future as armed forces or COVID testing, wherever required, but it has to learn a lot.

Currently, Tesla cars go millions of miles a day, which helps learn AI systems for better and efficient self-drive. Similarly, Tesla Bots needs to learn a lot from a surrounded environment, which comes only from real-life use experience. To achieve it, Elon has to make it affordable so people can use it as other electronics in the house. But it seems not possible anywhere in the near future, so we have to be a little relaxed about the risk of robots for now.