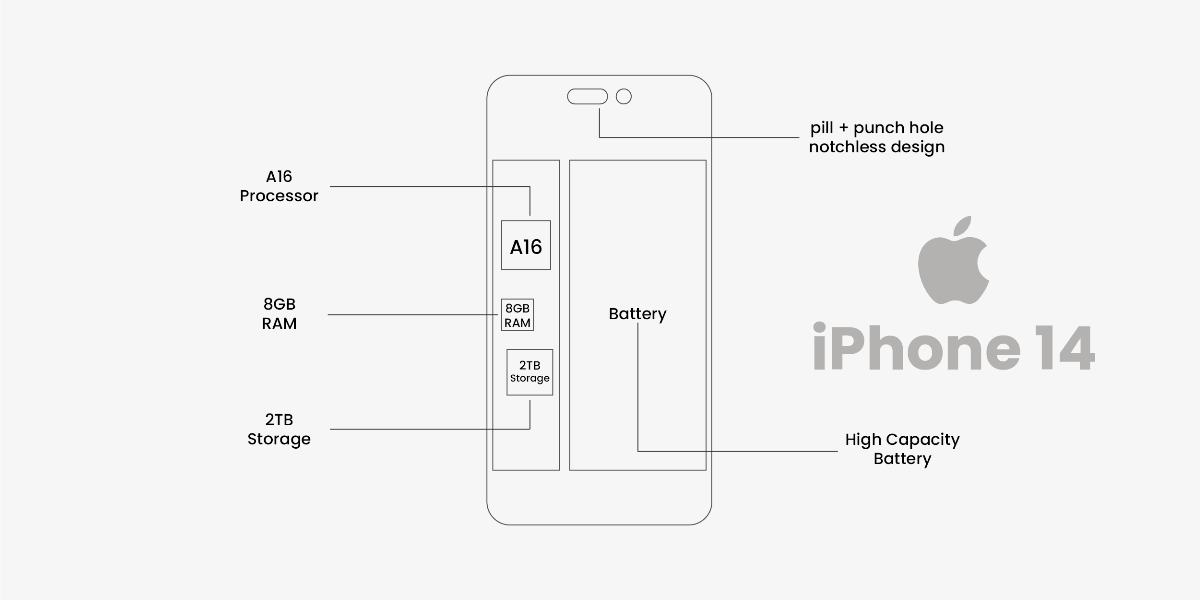 Apple iPhone 14 is a few months away from the launch date but leaked details tell the story. The new design leaks of the iPhone 14 show that notch will go away. Also, new improved cameras and other hardware specs are noticeable for the upcoming iPhone 14.

The leaked display information over the internet shows punch hole + pill design, so no more notch. But rumours say notch-less design changes made for iPhone 14 Pro and Pro Max models. So you may still see the notch display for iPhone 14 and Max versions. However, the leaked punch-hole design sounds bigger than other Android phones available in the market.

We now believe Apple will have a hole + pill design on the iPhone 14 Pro and Pro Max models. The smaller hole will not be invisible…The two hole concept will be unique to Apple, like the notch, not similar to all the pill models from Huawei…Let’s see those new renders pic.twitter.com/Udt8cTKzPZ

Furthermore, iPhone 14 will have 4 models with different display sizes and, surprisingly, no more Mini version. Apparently, iPhone 14 and Pro model will have a 6.1-inch display, whereas Max and Pro Max will have a 6.7-inch display. Also, every model is expected to have a 120Hz ProMotion display with various refresh rates for the upcoming Apple iPhone 14.

The camera is the most preferred hardware spec that everyone is looking forward to nowadays. And so, Apple is improving camera specs for the next iPhone.

According to the Ming-Chi Kuo (Tech Analyst), iPhone 14 will have a 48-megapixel camera with 8K video recording support. But again, it is expected to have in iPhone 14 Pro and Pro Max models only. However, the base iPhone 14 and Max model may have a 12MP camera.

The upcoming iPhone 14 offers a lot for camera specs, but iPhone 14 and Max model will have dual cameras. However, iPhone 14 Pro and Pro Max are high-end models that will have triple cameras at the back.

Apple iPhone 14 range will have a new 4nm A16 bionic chipset, according to Ross Young (Tech Analyst). Current iPhone 13 models use a 5nm A15 chipset, so A16 would have more power for new hardware.

Another hardware that performs better with better specs is RAM (Random Access Memory). So far, we have seen 6GB of RAM in previous-gen models like the iPhone 13. But Apple iPhone 14 Pro and Pro Max will feature 8GB RAM as the latest hardware upgrade. However, base models of the iPhone 14 are expected to have standard 6GB of RAM.

Further on, iPhone 14 models will start with a minimum of 256GB of storage space, a considerable upgrade. Of course, 128GB is not enough nowadays as iOS consumes lots of space along with huge gaming and other apps. Indeed, iPhone 14 could go up to a 2TB storage option where you have only 1TB max for current iPhone models. So you may see 256GB, 512GB, 1TB and 2TB storage space options for the upcoming iPhone 14.

The battery is another component when it comes to mobile devices. So Apple would improve iPhone 14 with a bigger battery capacity that lasts for a day, even for heavy usage. But battery capacity details are not available yet for the upcoming iPhone 14.

USB-C type charging port is expected in iPhone 14 as more extensive storage requires a faster data transfer rate. Also, Europe declared a compulsory USB-C port for all mobile devices last year to reduce waste. So it doesn’t make sense to have a USB-C for Europe and a lightning port for the rest of the world. However, Apple may decide to stick with a lightning port for iPhone 14 and introduce it with iPhone 15. But it will have MagSafe wireless charging support so not to worry.

Apart from the main specs, Apple iPhone 14 will have Wi-Fi 6E for a better data transfer rate and 5G. Also, it is predicted to have eSIM only, and Apple may drop the physical SIM slot from iPhone 14 series.

Apple iPhone 14 will have a titanium alloy frame, making it stronger and less breakable. Also, it will have one or two unique colours where you can expect a new pink shade for an elegant look.

The upcoming iPhone 14 base model price could be similar to iPhone 13. But iPhone 14 Pro models could have little more over the current pricing range.

September is when Apple launches the new iPhone, so there are higher chances of a similar pattern. You can expect the new Apple iPhone 14 launch date around in Mid-September 2022. And pre-order delivery start from late September 2022 in Australia and USA. However, Apple may organise a virtual launch event so maximum people can attend it.

Apple iPhone is a great phone, and people love it. But Apple often launches the same designs and minimum changes for a few versions. However, Apple is an innovative company and creates new devices with great designs.

Indeed, iPhone 14 will have a new improved display, notch-less design and better hardware specs. These improvements will boost the iPhone 14 performance and make it better than current models. So let’s see how good it proves the leaked specs for the upcoming Apple iPhone 14.