Sony’s PlayStation 5 is in hot demand between gamers community, but sadly there is no stock available to buy one. But PS5 stock coming back for retailers before the end of the year as per a tweet by PlayStation.

We want to thank gamers everywhere for making the PS5 launch our biggest console launch ever. Demand for PS5 is unprecedented, so we wanted to confirm that more PS5 inventory will be coming to retailers before the end of the year – please stay in touch with your local retailers.

“We want to thank gamers everywhere for making the PS5 launch our biggest console launch ever. Demand for PS5 is unprecedented, so we wanted to confirm that more PS5 inventory will be coming to retailers before the end of the year – please stay in touch with your local retailers.”, PlayStation twitted.

Twitter flooded with unpredicted comments by unhappy fans over the PlayStation 5 new inventory post. Many commented over low stock and not having a proper plan for PS5 launch. Twitter users also criticised Sony for not making it available in-stores and making pre-orders online only. Because of online pre-orders, some groups secured huge numbers of PS5 units using “Bots” pre-order registrations. Lately, they sold PS5 with huge margins over the multiple online marketplaces.

Sony may not have expected such great demand and Bots (automated) buyers for new PlayStation 5 console. Unfortunately, they left many PlayStation fans unhappy, and so they announced another wave of stocks of PS5 for retailers where buyers can go to the store to secure one.

Why is Sony PS5 stock not available in any store?

PlayStation gaming console is one of the favourites amongst the gamers community. Sony launched four versions so far for the PlayStations, and the last model released at the end of 2013. So it’s been almost seven years of a new version of PlayStation launch.

Apart from the long wait for a new version, PS5 powerful specs and outstanding features making it genuinely next-gen gaming console. PS5 will also get some new gaming titles and “Instant Demos” feature that will make gamers to try before buy. Sony also added a stunning intro of PlayStation 5 with some high-end game graphics that left gamers astounded. And so, Sony received the overwhelming response from PlayStation fans for pre-orders.

Another reason is, lots of people got the chance to buy multiple PlayStation 5 and resell it for profit at a much higher price. As per “Business Insider” report, one reseller group bought approx. 3500 PlayStation 5 with the help of the “Bots” to make a profit by reselling it over the online marketplaces. The group listed snagged PS5 consoles over the eBay, Instagram and similar marketplace with two to three times higher price. At the same time, many people were not able to pre-order most awaited PlayStation 5 gaming console.

What happened on launch date pre-orders of PS5 in Australia?

Some retailers like Harvey Norman, JB Hi-Fi and Gamesmen announced the PlayStation 5 pre-orders on the launch date of 12 November 2020. But sadly, all retailers website has been down and unable to proceed for the orders. Lots of angry buyers taken it to social media, and it became a News Flash within a few hours of the failed PS5 pre-orders event. Other retailers like Big W and Target stayed back for launch date pre-orders fulfilment and some customers unhappy.

Sometimes, Amazon having some great deals for PlayStation 5 console and accessories.

People complained that they were able to add the PlayStation 5 in the cart but wasn’t able to proceed for the payments. After a few hours of try, people gave up on buying a new PlayStation 5 for their loved ones.

Strangely, JB Hi-Fi sent some people a notification after few hours to checkout PlayStation 5 added in their cart. But of course, PlayStation 5 was “Out of Stock” so no one able to finish their “abandoned cart” purchase. 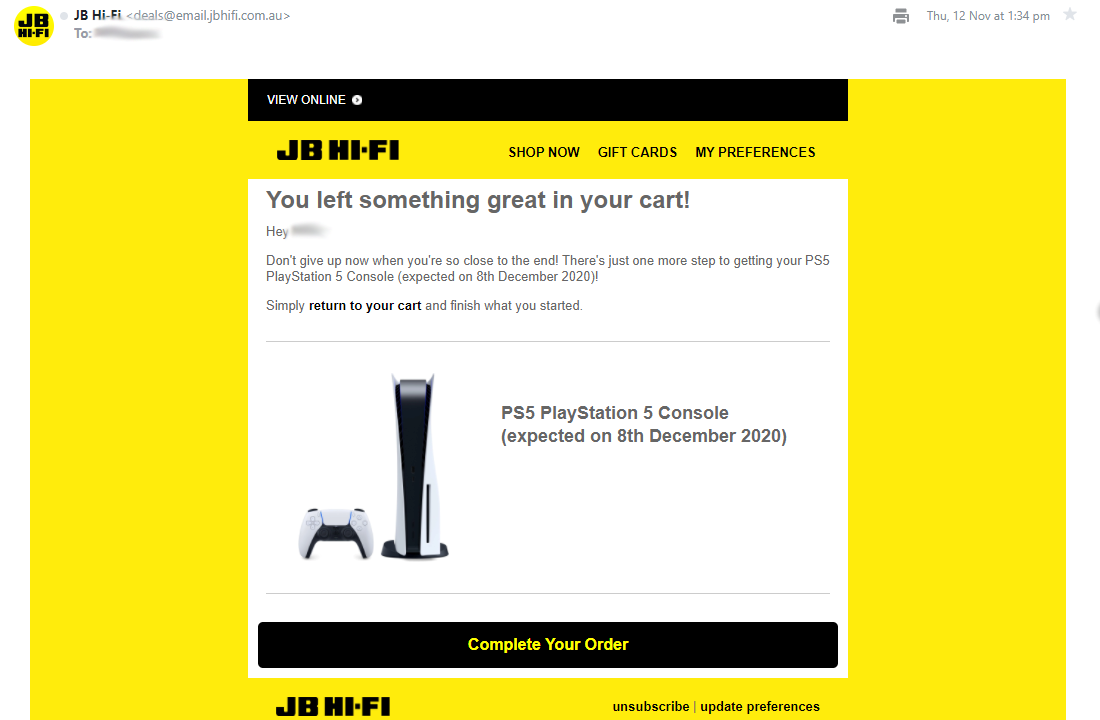 Microsoft launched the Xbox Series X with more powerful specs in compare of PlayStation 5, but PS5 gained more popularity. Due to the high demand, Sony booked out for the first batch of stock via online pre-orders that left no stock in-stores.

Apart from low stock, some groups secured a few hundred consoles to resell it for a profit with the help of automated registration bots. And so, there was no stock arrive in-stores to sell it to walk-in store traffic.

The good news is, Sony’s getting some inventory for retailers to sell PlayStation 5 in-store as per their tweet. They haven’t motioned about what retail stores and from which date it will be available in-store worldwide.  Also, there is no indication of having PS5 stock back in-store in Australia. But worth to wait and hopefully Australians will get some inventory so people can buy it directly from local retailers.

Make sure that you get one as soon as available else crazy demand for PlayStation 5 may leave you with none. Keep the sharp eyes on news and updates about PS5 stock to secure one.