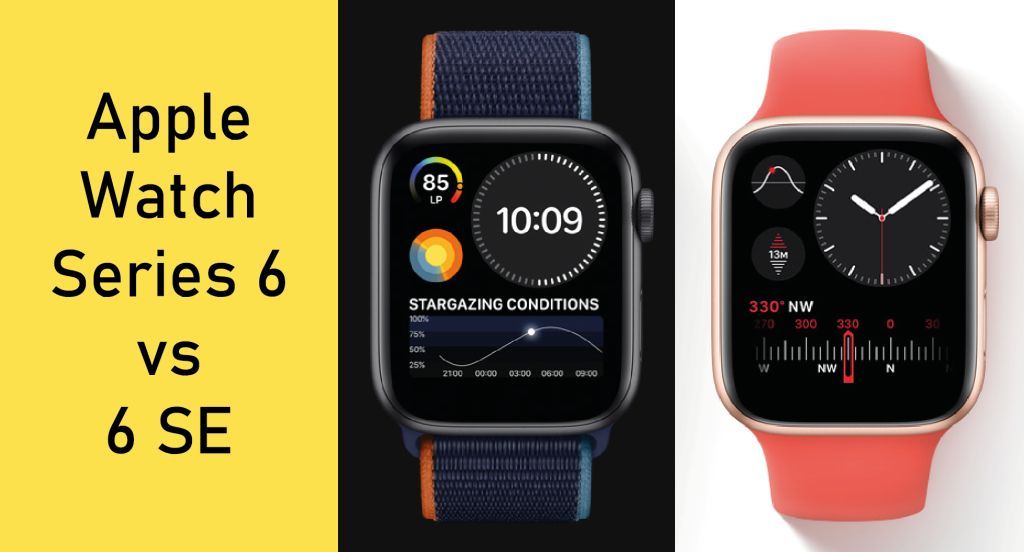 Both Apple Watch Series 6 and 6 SE models have Retina display, but Series 6 has Always-On Retina display feature. Because of the Always-On feature, you can look at your watch face at any time to see the time or widgets data without raising hand or tapping screen. Another benefit for Always-On display is, your cool watch faces will be visible to everyone.

The other core differences in both models are case materials. Apple Watch Series 6 has multiple options for a case like Aluminium, Stainless Steel and Titanium. But 6 SE model has only Aluminium case material for all colour variants.

Both Apple Watch Series 6 and 6 SE Aluminium model has Silver, Space Grey and Gold colour variants. But only Series 6 has two new additional colour options like Blue and Red or known as “Product (Red)”.

You can also upgrade for Stainless Steel case to choose from Silver, Graphite (DLC) and Gold (PVD) colour options. The Titanium case has Titanium and Space Black colour options available to buy.

Hermes wrist band editions are available only for Series 6 along with some other leather band choices. You can buy a wrist band of your choice separately but seems Hermes bands are costly to buy as it starts from $499.

Apart from various options from wrist band types and colours, Apple has modern buckle strap options available to purchase from the store.

Both watch models of Series 6 and 6 SE are water resistance and can go down up to 50 meters. It does also have 32GB storage space to install multiple apps and store some data.

The Series 6 and 6 SE Watch have wireless charging technology as it does have for other models too.  And the standard package will come with a magnetic charging cable for watch charging. You can also buy some cool charging accessories for your Apple Watch or iPhone charging.

Both Watch 6 and Watch 6 SE will hold up to 18 hours of battery life to meet the new features requirements. But Series 6 has Always-On Retina Display that might consume more power. And there is no specification on either it does have the bigger battery capacity for Apple Watch 6 model.

Apple Watch Series 6 and Watch 6 SE do have the Bluetooth 5.0 connectivity to sync with apps or connecting AirPods for music or calls. The Bluetooth can help to track your health data and sync with the appropriate app to store data for everyday routine tracking.

Apple Watch 6 GPS only version price starts from AUD $599 whereas the GPS + Cellular version will cost AUD $749 to Australians. It seems the reasonable starting price for Apple Watches.

The other model of Apple Watch 6 SE has an attractive price tag of AUD $429 for GPS only version and AUD $499 for GPS + Cellular model. The reason for Watch 6 SE model is to provide it at a reasonable price to the customer and for kids too.  Parents can get the one for kids and connect with their phone to track kids and keep in touch. Kids can also make the call from their watch to contact parents or relatives so that will be an excellent and affordable option for kids Apple Watch.

Apple Watch Series 6 has lots of improvements in terms of the specs and features. It will be helpful in health tracking and emergency, particularly for elderly peoples. Because it has features like blood oxygen level monitoring, fall detection, notifications, and emergency call make it stand out.

On the other hand, Apple’s 6 SE model has similar features like Series 6 except a few core features. But it comes with the affordable price tag for Apple Watch lovers. Because it can provide the various health data along with the call functionality for GPS + Cellular model. Apple’s 6 SE Watch also track the heart rates, fall detection, noise level and dial an emergency number on events that requires the attention.

Overall, both, Apple Series 6 and 6 SE have lots of features that meet the day to day requirements like an exercise goal, health tracking and notifications.  Because Apple Watch Series 6 and 6 SE made for kids to elders and professional peoples in many aspects. It has an elegant look, pro features and affordable price tag too.